A colt by War Front from the family of Hall of Famer Rags to Riches became the most expensive Thoroughbred yearling to sell anywhere in the world to date this year when he commanded $2.4 million from Coolmore’s M.V. Magnier during Tuesday’s second session of the Keeneland September Yearling Sale. War Front also sired the day’s top-priced filly, a half-sister to champion and Kentucky Derby (G1) winner Nyquist, sold for $1.75 million, and a colt from the family of Irish highweights Yesterday (IRE) and Quarter Moon (IRE) for $1.2 million.

These yearlings were among the eight yearlings Keeneland sold Tuesday for $1 million or more, increasing the total number of seven-figure horses from the first two days of the September Sale to 13.

“We were cautiously optimistic, but I can’t say we knew it would be as strong as it was today. That blew away our expectations,” Elliston said. “Everyone had high hopes, given the quality we have seen, observing what has transpired in other sales this summer and knowing the entire world would be coming to this sale. The buyers had their piggybanks open and it was quite a show.”

“I know there are high-quality horses in the next two days (of Book 1) and there are folks eager to buy, so I think we will continue to have competitive bidding,” Elliston said. “Today’s strong trade foreshadows strong sales throughout the entire auction.” 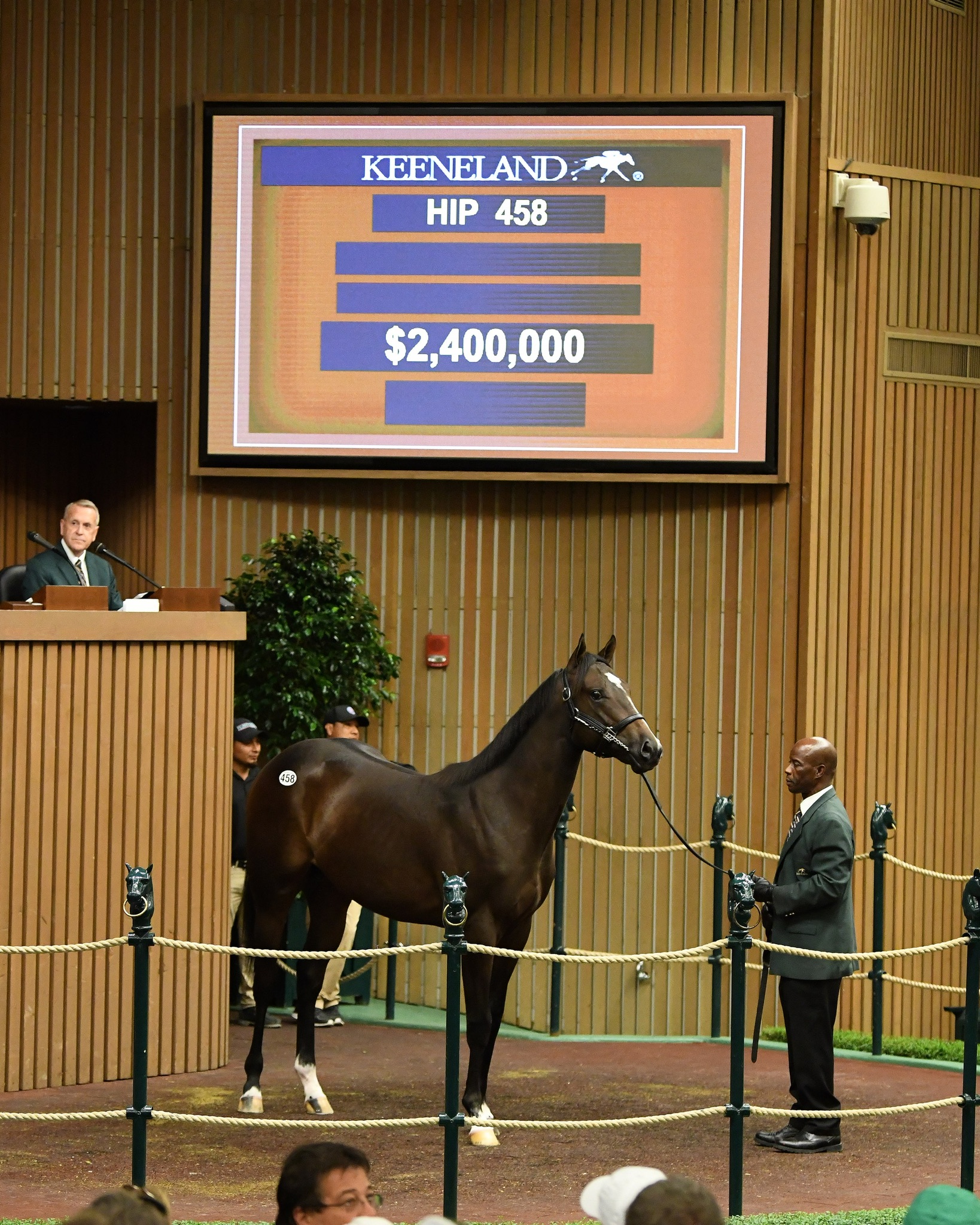 “We had high expectations, but you never know,” said Hill ‘n’ Dale President John G. Sikura. “That is our best pedigree, and we are very proud of this one that we have developed over time. We retain fillies and offer these good colts. We thought he could be the sale topper but you just have to be humble and work really hard to present your horses as well as you can and hope they are well received.

“These are world-class professional buyers,” Sikura added, “and when good horses present themselves they are there to buy them.”

“We’ve been (very lucky with the family in the past),” Magnier said. “He’s a lovely horse and he has all the right credentials as well for a great racehorse. We’re going to bring him back to Ireland and hopefully he’ll end up being a good one.

A War Front filly who is a half-sister to Nyquist and was bred and consigned by Hinkle Farms sold for $1.75 million to Sheikh Mohammed Bin Rashid Al Maktoum’s Godolphin. Trainer John Gosden, who signed the ticket, said the filly most likely will go to Europe.

“(Her price) was very strong,” Gosden said, “but when you’re buying a filly of that absolute quality from a fine breeder, by a great stallion, a half-sister to a Kentucky Derby winner, that’s exactly what you expect to pay to raise her to be a broodmare.”

“You don’t ever expect that (price),” co-owner Tom Hinkle said about the amount paid for the daughter of the Forestry mare Seeking Gabrielle. “She has been a star since the day she was born. My team at the farm did a great job with her from the time she was born until she walked into the ring. She is a lovely filly, the kind you don’t get to have your hands on that often. The last horse we sold for $1 million was a Danzig colt (in 1985). So that is a long time between drinks.”

Godolphin was the session’s leading buyer, spending $5.67 million for six yearlings. Other purchases included acolt by Curlin out of stakes winner Stoweshoe for $1.3 million. From the family of Grade 1 winner Taris, he was consigned by Eaton Sales, agent.

Anthony Stroud, who signed the ticket, said the colt is “very athletic. He just had a good way of going.

“(We paid) more than we anticipated, you know you’ve got to stretch when you see one you really like.”

Secret Agent, a colt by Uncle Mo, sold for $1.4 million to Mike Ryan, agent. Out of the Street Cry (IRE) mare Secret, he was consigned by Bridie Harrison, agent for Peter E. Blum Thoroughbreds.

“It blew me away when I saw him because he reminded me of Nyquist,” Ryan said. “We bought Nyquist as a yearling here for a whole lot less ($230,000), but this horse was very, very special. I thought (he) might have been the best yearling I saw this year. I bought him for a partnership and haven’t figured out who is going to train him yet, but he’ll go to a top trainer.

“We think he’s a top prospect, a classic horse out of a Street Cry (IRE) mare, and we’re dreaming Derby.”

“I am delighted for Peter Blum and everybody at the farm,” Harrison said. “I knew he would go for quite a lot of money but I was not expecting that much. He is a big well-balanced colt with a very nice walk and a nice way of moving. And Uncle Mo is as good as sire as there is. Since (the yearling) was born we knew he was special.”

Van-Meter Gentry Sales, agent, consigned two of the day’s seven-figure yearlings, led by an Empire Maker colt sold to Phoenix Thoroughbreds for $1.35 million. Out of the Carson City mare Seeinsbelieven, the colt is a half-brother to Grade 2 winner Conquest Big E and stakes winner Aquapazza.

Magnier paid $1.2 million for a filly by American Pharoah out of the Beau Genius mare Pretty ‘n Smart who is a half-sister to Grade 1 winner Cupid, Grade 3 winners Heart Ashley and Ashley’s Kitty, and stakes winner Indianapolis.

“(Pretty ‘n Smart) has been an awesome mare,” said consignor Tom VanMeter, adding that his late business partner, Olin Gentry, “who left us too soon, is responsible for everything this mare has done. She means everything to our operation – she has provided our own sale-topping yearling every year. This filly did everything right, and we were pretty confident she would sell well today.”

Magnier has purchased three other foals from Pretty ‘n Smart, each by Tapit, at the September Sale.  He paid $900,000 in 2014 for Gold Cup at Santa Anita (G1) winner Cupid, who stands nearby at Coolmore’s Ashford Stud. In 2013, Magnier spent $1 million for the colt Dream Team. Last year, he paid the sale-topping price of $2.7 million for filly now in training in the U.S.

He said the American Pharoah filly will be sent to trainer Aidan O’Brien in Ireland.

“(American Pharoah) was such a great racehorse, and he’s so sound himself let’s hope he passes it on,” Magnier said. “It looks like he has every chance of doing that.

“(Trainer Bob Baffert) said he really thought American Pharoah would have gone on the grass,” he added. “We’re just going to try and get these American horses over to Europe and see how it goes.”

A colt by War Front consigned by Dromoland Farm, agent, sold to Sheikh Hamdan Bin Rashid Al Maktoum’s Shadwell Estate Company Ltd. for $1.2 million. The colt is out of the Lookin At Lucky mare Pin Up (IRE).

“I am absolutely delighted with the price,” Gerry Dilger of Dromoland said. “All week long he did everything right. After that, he sold himself.”

Albaugh Family and Spendthrift teamed to pay $1 million for a Pioneerof the Nile colt out of Grade 2-winning Pomeroy mare Pomeroy’s Pistol. He was consigned by Brookdale Sales, agent for Hardacre Farm.

“We stretched and we got a good partner (Spendthrift Farm),” Dennis Albaugh, Chairman of Albaugh Family Stables, said. “We’re excited about it and can’t want to get (the colt) off to training so we can get (him) to a race track.”

The Albaughs’ Free Drop Billy, winner of Keeneland’s Claiborne Breeders’ Futurity (G1), is to stand at Spendthrift following his racing career. The Albaughs purchased Free Drop Billy for $200,000 at the 2016 September Sale.

Brookdale Director of Sales Joe Seitz said the sellers were delighted with the price.

“He is a really special horse – one of those uncommon kinds with presence and sustainability that come together out here (at the sale),” Seitz said. “He handled himself so well in the rain and the wind (on pre-sale showing days) and through so many shows that the price did not surprise me. He is such a quality individual. It is the ultimate compliment when they get in good hands like Spendthrift and the Albaugh group. It is also a compliment to Amy Tarrant, who bred and raised him at her Hardacre Farm in Florida.”

Gainesway was the leading consignor on Tuesday, selling 18 yearlings for $8,715,000.

The September Sale continues through Sunday, Sept. 23, with the third of four Book 1 sessions beginning tomorrow at 1 p.m. ET. The Thursday session also will begin at 1 p.m.

The entire sale is streamed live at Keeneland.com.